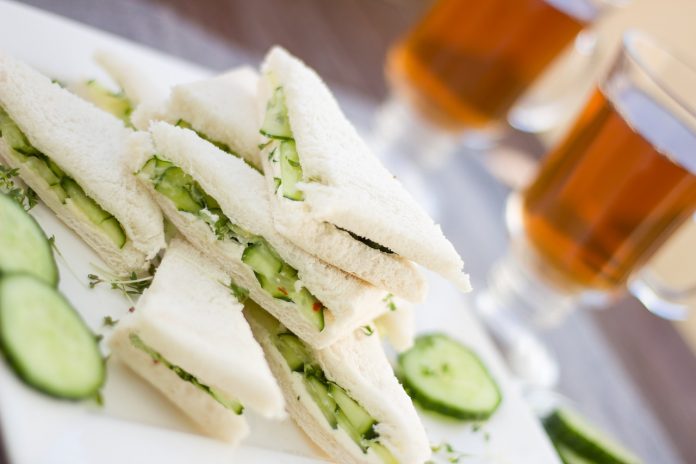 Versatile and refreshing, suitable for picnics and parties, lunches and teas, the Cucumber sandwiches remains an all-time dainty favorite. Due to their lightness, they are an often-preferred appetizer. But despite being simple to make, you need to be careful or you’ll end up with a mushy and wearisome mess!

Cucumber sandwiches originate from England from the Victorian era when it was usually had with tea during the afternoon; between lunch and dinner. It was considered a food of the wealthy due to the unavailability of cucumbers year-round unless one owned a hothouse or had easy access to such products. Since this particular sandwich did not carry the ‘filler’ quality, the working class preferred a heavier snack like meat pastries for their tea. Just something that may even cover supper all at once.

As years passed by and came the Edwardian era, cucumbers from the hothouses became more accessible and plenty due to an increase in coal to run the hothouses. More people started trying them out though it remained somewhat of a ‘special’ snack.

So, Is There a Special Time and Place to Have Cucumber sandwiches?

Cucumber sandwiches have thus found a permanent place in teatime menus. It was usually considered and still is, a light meal with tea or a snack during cricket matches or picnics and a staple for high teas.

Cucumbers are from the family of melons, cantaloupes, and honeydews and they contain about 95% of water. English cucumbers are the ideal variety for these sandwiches. Leaving the peel on will be ideal for that beautiful green but they can also be peeled if you prefer so. Slice them paper-thin (a good slicer would be of great help for equality) and leave aside to drain before adding them into your sandwich.

Which Bread to Go Together?

As for the bread, the best is white, with crusts removed, as new as possible (for extra soft sandwiches). If you are more of a whole meal person, yes, you can use wholemeal or any other type of your choice. The Brits, somehow, take pride in thinner slices. Historically. The thinner the slice; despite the pressure on the chefs; the happier the ladies used to be!

The original cucumber sandwich consists of just these two ingredients with a spread of butter. This can be plain and unsalted butter or a flavoured one with herbs. The ingredients added after these are variations and these can go from herbs, potato or dill cream cheese; spread; to herbs, garlic powder and even chutney.

Another important point to note is for best results (and best reviews) please don’t plan to make these in advance. Best served immediately is the all-time rule.

Cucumbers are guaranteed to relieve you of dehydration. And oh-so-refreshing in hot and humid weather! The Vitamin K in cucumbers help with blood clotting and can help keep diabetes under control. The cucurbitacin found in cucumbers may help prevent cancer cells from multiplying and one of the most significant features of this fruit is how it assists in reducing inflammation including muscle inflammation due to containing anti-inflammatory enzymes.