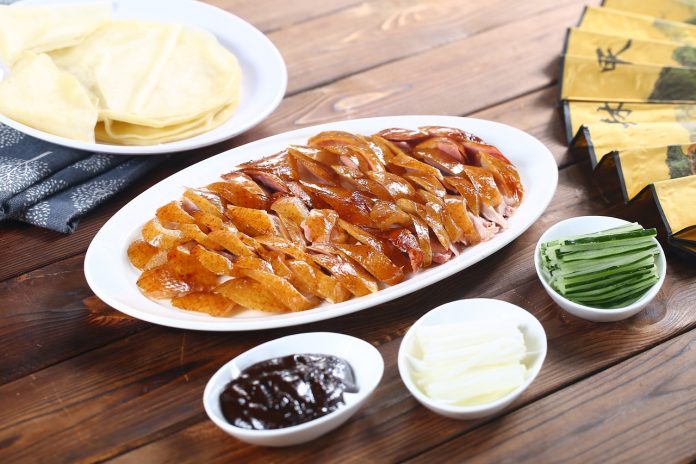 Do You Have Any Plans to Visit Beijing?

If yes, before making your trip do a better search for Chinese Cuisine, because it is world-famous, wherever you travel around the world you can see a Chinese Restaurant there.

So when it comes to Beijing it is most famous for traditional Chinese Cuisine such as “Peking Duck, Jiaozi, Shuan Yangrou and many more” but “Peking Duck” is the ever wished dish in Beijing, whoever visit Beijing you should not return back without tasting this wonderful dish. I hope many of you really wanted to taste this heavenly dish, but before that will see “what is Peking Duck? And why is it most famous in Beijing?

Have You Ever Heard About Peking Duck?

Peking Duck is named after Beijing. It is a dish from Beijing. It is a duck that is marinated and then roasted. After that cut into slices wrapped in a thin crepe and garnished with onions and cucumber, served with bean Sauce or black sauce.

Why is “Peking Duck” Famous in Beijing?

A dish in Beijing, it originated from the former city Nanjing, so during the Ming Dynasty’s imperial court moved to Beijing by bringing roasted duck along with it, by then Peking Duck was an important item in the imperial menu and also during Qing dynasty. This was praised by poets, “Peking Duck” was a centuries-old imperial dish in China,

Are there any Historical Restaurants for Peking Duck in Beijing?

Yes, “Bianyifang” established in 1416, it was a small shop which produced duck & chicken foods, in 1827 it expanded as a bigger restaurant by “Sun Zijiu”, that time “Peking Duck” was a famous dish in this restaurant and those days “Bianyifang” was very famous, so other restaurants also named themselves as “Bianyifang”.

What Kind of a Duck is Used for Peking Duck?

White ducks raised only for the purpose of Peking Duck dish, those ducks are bred specially for 65 days, after that it is killed, cleaned and used for the preparations.

In Common What Kind of Preparation is Peking Duck?

Properly clean the duck, sprinkle salt and pepper over the duck and leave it, in a small bowl add “honey, water, spice powder, sugar” and mix together, use this mixture to brush the duck inside and outside, leave it for minutes, let it marinate overnight without covering the duck.

So the next day preheats the oven and keep the duck inside and roast it for minutes until it gets crisp or brown and repeat it for some minutes, once fully roasted take duck out and keep it and serve it with the Sauce and Crepe.

How is “Peking Duck” Served?

The roasted duck will cut into thin slices & crispy pieces, will keep it in a tray, garnish the tray with onions, cucumbers, etc. Keep the sauce and crepe in a tray.

Here will see how to taste it, take the crepes and keep the sliced duck inside the crepe and wrap it, after wrapping it dip it on the Peking Duck Sauce and bite it, am sure definitely you will forget yourself in its heavenly taste.

Are you ready to try this mouthwatering dish?

If yes, visit Beijing, don’t forget to find these famous restaurants in Beijing.

When you visit Beijing, never miss a visit to these historical and famous restaurants in Beijing.

Visit Beijing and taste these mouthwatering Peking Duck and share your experience with your friends and families.

Hope this article is really useful for “Foodie Lovers”