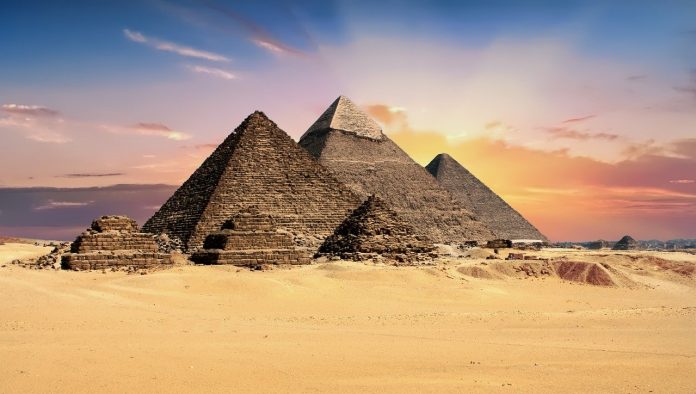 The famous Pyramids of Egypt! We all question what’s inside it and how it came to existence, how was it constructed and who made it? The answers to all your questions will be explained here. This article is about the mysterious pyramids located in the Middle Eastern country of Egypt.

Pyramids are some of the most fascinating creations shaped by mankind. The Pyramids of Egypt have played a significant role in the culture and traditions of their country. As impressive as it looks, it does have a deeply rich history. So let’s get right into it!

When it All Began…

The pyramids of Egypt date back to the time of BC with the first-ever pyramid named the Pyramid of Djoser. It was constructed from 2630-2610 BC during the period of the Third Dynasty. The earliest pyramids built are found at Saqqara in Memphis, Egypt. The Pyramid of Djoser was identified as the world’s oldest substantial majestic structure made of dressed stone. This initial pyramid was only 62m (203ft) high.

Below is a view of the first-ever pyramid built: The pyramid of Djoser

What the research tells us…

Then came the Pyramid of Meidum. Constructed in 2600 BC in Meidum, Egypt. This pyramid is currently partially standing and isn’t in the best condition. It is believed to be the second pyramid built after Djoser’s pyramid. To this current date, it no longer resembles a pyramid due to its change in shape through time.

The Pyramid of Meidum was also recognized as the Collapsed Pyramid or “el-haraam el-kadaab” (the “false pyramid” in Arabic).

These two pyramids are the first to ever be built. And hence, it led to further more pyramids made after them such as the Bent Pyramid, Red Pyramid, etc.

How Were the Pyramids Built?

Countless people, to this date, still question how the pyramids in Egypt were made. Well, to begin with, the most prominent pyramid that is the Great Pyramid of Giza was an order to be built by the Pharaoh Khufu around the time of 2560 BC.

This only covers how the stones were transported from one point to the other.

What the Research Tells Us…

A more intriguing question is how did they build it towering up into the air and settled into a triangular shape?

Researchers observed that through their discoveries there is a great probability of the usage of ramps constructed at acute angles. Firstly, they were assumptions made but later on, the proof they came across showed them exactly what they thought. In Hatnub, a desert East of Egypt located another quarry. This ramp seemed to be rather steep and was flanked on both sides by staircases which supported their research. These stairs had recurring holes on them that appeared to have had wooden posts planted into them.

Furthermore, this turned to another investigation on how the pyramids in Egypt have been mounted so high up in the air. They believed that the recurring holes on the stairs resemble to suggest a kind of rope-and-pulley system that must’ve been used to develop the higher elements of the pyramid.

All this information that researchers have accumulated does not confirm how they were created but it is as close as they’ve gotten to solve this mystery on how the pyramids in Egypt have been built.

Now, it is a theory that pyramids were built by slaves who were under the command of a ruthless pharaoh, just as how the Great Pyramid of Giza was built for the Pharaoh Khufu back in 2530 BC.

Although, according to the Egyptologist, Mark Lehner they weren’t slaves as he discovered the City of the Pyramid Builders. And it was reported that slaves did not make these ancient pyramids as tombs of them over 4000 years old was unearthed.

Furthermore, a line of modest nine-foot deep shafts that accommodated a large quantity skeletons who were the pyramid builders of the Great Pyramid of Giza. These tombs formed of mud-brick were discovered at the back of the Giza pyramids occupying a burial site that was originally located in the 1990s and from the research; it records back to the 4th dynasty, which was between 2575 BC and 2467 BC. This is when the pyramids were constructed.

Who Built the Pyramids?

Zahi Hawass, an archaeologist from Egypt stated that they were paid workers and not slaves that built it. Once in the 1990s, a tourist on a horseback stumbled over what he thought was a wall but turned out to be a tomb. The pyramid builders appeared to be from underprivileged families and worked hard whilst getting rewarded for it. To honor them, they were buried in tombs near the sacred pyramids of their pharaohs.

It took 10000 workers over 30 years to build a single pyramid as through the research gathered from Hawass.

Why did they decide to build them?

The pyramids in Egypt were built for the pharaohs as a burial place and as a monument. The people from Egypt believed that to succeed in their afterlife, certain items have to be placed with them. Hence, all sorts of treasures and items were buried deep inside the pyramid of the pharaohs to ensure that they survive in their afterlife.

Places you just can’t miss out on!

You just can’t skip past this ancient burial ground that is Saqqara, this may be one of the most underrated places in Egypt. We look ahead to the best pyramids from not knowing where they all originated from, in Saqqara. As archeological evidence tells us, this place will reveal to us the failed attempts of building the first pyramid and thus began the learning process.

Saqqara is home to the first pyramid ever built, which is the pyramid of Djoser. Another pyramid that is the bent pyramid can also be discovered here as you can learn and observe the real reason why it’s bent. It is said that the “bent” shape came from the realization of the architects at the time that it’s a very steep angle hence wouldn’t be possible to mount further. Therefore, they flattened it to give it a “bent” shape because they no longer were equipped to build such a steep pyramid.

Don’t miss out on Saqqara if you’re curious to learn and witness the history of the pyramids and how it all began!

Below is the first pyramid ever built: Pyramid of Djoser

The Pyramid of Giza

How could you go to Egypt and miss out on the single oldest, last surviving Seven Wonders of the World. This iconic landmark is a magnificent place to visit, the Pyramid of Giza guarded by the mystifying Sphinx.

Constructed as tombs for the all-powerful pharaohs to rest in peace with special items for their afterlife. This memorial to the fallen kings is accessible and is being visited by a large crowd of people to this date. Facts about one of the seven wonders have been spoken about earlier in this article. But the Great Pyramid of Giza simply cannot be missed by you if you do decide to visit Egypt.

Below is a view of the Great Pyramid of Giza and a couple of camels looking towards it:

Finally, Why You Should Visit the Great Pyramids…

It was the order of the pharaohs to build these ancient monuments which for most of it still stands firm and is currently visited by over 14.7 million people yearly.

If ever are fortunate enough to tour the beautiful pyramids in Egypt, don’t ever forget your camera as you do not want to miss this opportunity to snap pictures of this iconic monument.

Stay hydrated! Always carry water with you. Egypt is a warm country and the deserts are a very heated place to be at.

Take a notebook if you’re interested in recording down what you observe as the pyramids have a lot of stories that it can tell you. Be prepared to be fascinated by them!

The Great Pyramid of Giza is the oldest of the Seven Wonders of the World and is a sight to not miss out on as they are considered by many to be seen once in a lifetime!